Bluebeard - the natural predator in us all

The Bluebeard story is a frightening and fascinating tale. Believed to have been inspired by the 15th century Breton serial killer, Gilles de Rais, the story has been retold by Charles Perrault, Jakob and Wilhelm Grimm and Henri Pourrat.  Variations of the tale exist in the folklore France, Germany, Estonia, Tuscany and even the United States while comparable tales have been recorded in Indian and Pueblo cultures. Similar stories containing the central motif of a secret room which must not enter exist in Russian and Scandinavian folklore.  In centuries past, the Bluebeard figure represented a thinly disguised racist stereotyping of 'unfamiliar' men, but for the tale to be meaningful today, it needs to been seen to have dimensions which address the challenges and understandings of our times. 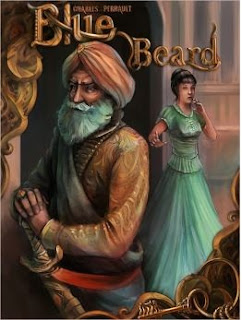 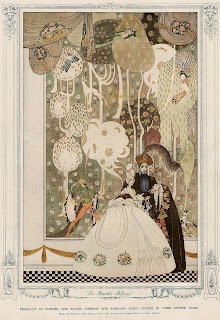 Modern versions include the movie The Piano and comparable tales by Kurt Vonnegut Jr, Anatole France and Eudora Welty among others. A feminist version of the story is Margaret Atwood's 'Bluebead's Egg', set in Canada and featured in Jack Zipes Don't bet on the Prince, it illustrates just how difficult it is for contemporary women to develop the consciousness they need. However, to focus on the fact that the protagonist in the story is female, is to lose an opportunity to benefit from its gifts. The story is about powerful forces at play in the psyche of all human beings.

An annotated version of the story can be read at SurLaLune Fairy Tales website. The purpose of this post is not to repeat the tale or variations of it, but to examine three interpretations of the tale and in doing so, distil out the 'medicine' it can offer to readers today.

So who and what does the "Bluebeard" leitmotif represent? 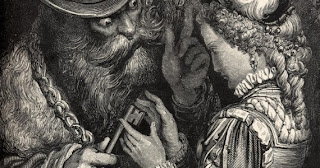 Bruno Bettelheim, in his book The Uses of Enchantment (1976) Penguin Books, p. 301, suggests that Bluebeard is a tale about sexual temptation, more specifically about the destructive aspects of sexuality. From his point of view, it is a cautionary tale introducing mainly child listeners to two related emotions, jealous love (on the part of Bluebeard) and "dangerous" sexual attraction (culminating in  infidelity) on the part of his wife. The "weeping key" is seen as a metaphor for sexual indiscretion.  In Bettleheim's view, there are two morals to this tale - the first, simply stated is "Women do not give in to sexual curiosity", the second, "Men, do not permit yourself to be carried away by your anger at being sexually betrayed." Reducing the tale to this kind of simplistic interpretation robs it of its real potency and polarises its audience.

Another more intriguing interpretation is suggested by Marie Louise Von Franz, the doyenne of Jungian analysis who in her Anima and Animus in Fairy Tales, dismisses Bluebeard as "a wonderful image of the destructive, murderous animus." She elaborates on the symbolic meaning of the beard, explaining that hair on the head represents involuntary unconscious thoughts and fantasies which have a bewitching or numinous quality. As we can influence our environment much more by our unconscious assumptions than by our conscious thoughts, the symbol "hair" underlines the spiritual power of our unconscious thoughts.  The beard, then represents the flow of unconscious talk that animus possessed women are given to.  This talk contains both thrash and pearls. The way a woman can deal with the animus is not by killing it (as a man might), but escaping it.  To state things more clearly, "If a woman hasn't gone through the experience of being trapped by a demon animus she has only unconscious thoughts.  It is the demon who provides her with the ladder to escape" (to consciousness).

By far the most comprehensive, meaningful and poetic analysis of the Bluebeard story is suggested by Clarissa Pinkola Estes in Women who Run with the Wolves.  She names Bluebeard as 'the natural predator' of the psyche - an inner entity in both men and women, that requires our awareness and containment.  Though the story centres around a female character, it should be noted that this 'young woman' represents the inexperienced or immature natural aspect of everyone regardless of gender. The inner predatory force represented by Bluebeard, attempts to "turn all crossroads into closed roads" by severing our intuitive nature.  It is a malignant force at odds with the instincts of the natural self.

Our task on the way to maturity is to recognise this predator and protect ourselves from it.  The Bluebeard story tells us how to do this.

The youngest sister in the story represents the creative potential within the psyche which when 'naive' or 'undeveloped' can be captured by the inner predator.  This occurs by surrendering to the whims of the ego rather than heeding the inner knowing that intuition gifts us.  The price of "marrying" the predator is a life of living falsely.

There is a way our of this, but one must have the key.  The key is "both permission and endorsement to know the deepest, darkest secrets of the psyche".  The door in the story is a psychic barrier, a kind of guard placed in front of a secret.  Asking the 'key' question unlocks this barrier by causing a germination of consciousness. Asking it is "the central action of transformation" in fairy tales, analysis and in individuation. 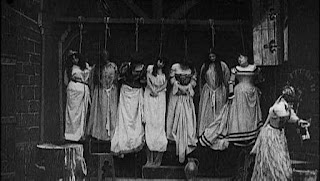 Once the key unlocks the door, the young, untried aspect of the self sees the shocking carnage done to some part of our deep life.  The next step is to stand and face it for what it is, without fear or denial or shame, to just see it for what it is, for in doing so, the innocent instinctual self regains its soul power.  The step after that is to manouver to regain sovereignty over one's life and to do so one might have to stall, back-track and employ whatever coping strategies one needs to keep the predator at bay until one can escape.  Pinkola Estes specifies that analysis, dream interpretation, self-knowledge and exploration of non-conventional ways of knowing can enable us to see a situation from widely different perspectives and these multiple views empower us.

To escape however, we have to call upon our psychic 'brothers', those aspects of our psyches which are more 'muscled' ie more naturally aggressive than our feminine consciousness.  They provide us with focussed determination to act and represent the blessing of strength and action. 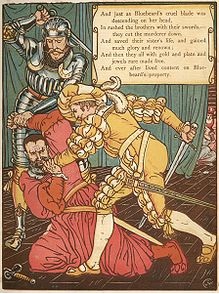 Ultimately, this interpretation of the Bluebeard story is about the regaining of consciousness, the heeding of intuition and the asking of key questions as a road-map to a meaning-filled life.


Posted by Gillian Valladares Castellino at 1:11 AM